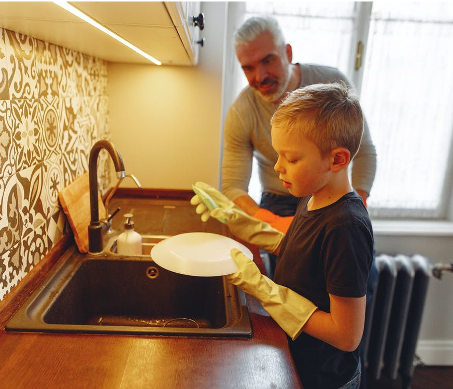 I was an activist for gender and racial justice long before I became a father. Perhaps because of that, becoming a father (rather late in life – I was 46 when my child was born) was an experience that I found to be mutual influencing: becoming a dad has influenced my activism, and my activism influences my daddying. NRCDV invited me to share some of my experience and reflect on these mutual influencing dynamics as a part of recognizing Father’s Day.

Before I begin, however, I feel a need to note an important aspect of fatherhood for me. Traditionally, Father’s Day is a day where we, as dads, are honored and celebrated. While I appreciate having a day to celebrate mySelf as a dad, and the chance to honor my dad and what I learned from him, it’s also true that I need to honor my son. I wouldn’t be a dad if it weren’t for him. Furthermore, being his dad has vastly improved who I am as a person. We don’t have a “children’s day” where we get to honor and celebrate our children and the gifts we receive from them, so I share Father’s Day with him.

Practicing fatherhood as a white man, raising a white male child, in the context of relentless and intensifying white and male supremacy is an intentional journey that requires relentless attention. I am parenting while white, striving toward racial justice; I parent while male striving towards gender justice. But also (at this moment) parenting in the context of a global pandemic that has profoundly re-shaped and expanded my parenting responsibilities.

One lesson I learned from being a dad to K is that “practice makes progress.” I was raised to believe that “practice makes perfect.” The resulting perfectionism significantly hampered my activism and my initial daddying. My need to “do it right” meant I often hesitated to do anything (on countering racism or sexism) because I wasn’t convinced it would be right enough; and resulted in my being overly harsh with mySelf when I failed (often acting outwards with my harshness when I felt too ashamed to own my failure as my own).

I was raised to be a perfectionist. Through raising K, I have come to accept that there is no such thing as perfect, and progress is a much more meaningful (and achievable) goal than perfection. Perfectionism is not only a “quality” instilled in me by my family, but is also a value that is deeply ingrained as a part of white supremacy and patriarchy. A value that has been put in place, and is used, by white people and by men (respectively) to rationalize not being more active in efforts for racial and gender justice.

I am not now, nor will I ever be the parent that I want to be – or the parent that K actually deserves. I am not now, nor will I ever be the activist that I want to be or that people and groups I seek to ally with deserve. I don’t say that from a sense of failure or defeat, but rather from a place of honest assessment. There are ways I am a really good dad, who is also deeply flawed. There are ways that I am an extremely effective activist, who makes mistakes and missteps on a regular basis. Acknowledging that I work in progress, as a work in progress, allows me to more honestly and accountably notice the progress I’m making while attending to my flaws, mistakes and missteps. Being a dad has taught me how to acknowledge my failings (as a dad and as an activist), transparently own them, apologize and make amends to my son, while also holding some self-compassion for being enough. Some of the lessons I’m learning (and practicing) include:

Being a white male father raising a white male child with feminist and anti-racist values in a society built on white male supremacy is deeply difficult. I find mySelf wondering about how I’m doing as a parent generally, how I am raising my son to challenge white male supremacy, and how I may be inadvertently reinforcing white and male supremacist values. In addition to all of this, the current context of a global pandemic and physical distancing calls for new forms of activism and advocacy. But daddying, like activism, is a work of constantly striving (more than achieving). In my dual roles as a father and as an activist, I focus on making strides towards peace and liberation, alongside my partner (K’s mom) and K. On this Father’s Day, I say again, how deeply grateful I am to K for being a part of my striving.

Listen to Rus along with stories of other activist fathers on the newly-released NRCDV Radio podcast, Stories of Transformation: Honoring Advocate Fathers.