A commonly used parable in social justice fields tells of two people fishing downstream. Suddenly a person comes down the river struggling for life. The fishers pull her out. Then another comes and again must be rescued. This happens all afternoon, and the fishers are getting very tired from trying to help as many people as possible. Eventually they think: “We need to go upstream and find out why so many people are falling in the water in the first place!” When they go upstream, they find that the old wooden bridge had several planks missing, and when people tried to jump over the gap, they couldn’t make it and fell through into the river. In the end, the fishers worked with the community leaders to fix the bridge.

The “moving upstream” analogy (and its various versions) is a helpful illustration of the primary prevention approach. In the context of domestic violence, primary prevention encompasses proactive efforts to stop intimate partner violence and abuse from happening in the first place by interrupting the cultural rules, norms, and constructs that support it (preventIPV.org)

“Primary prevention is changing the social norms that allow and condone violence. Preventing violence means changing our society and its institutions—targeting attitudes, beliefs, behaviors, environments and policies to eliminate those that contribute to violence and to promote those that stop the violence. Primary prevention of domestic and sexual violence is defined as preventing violence before it occurs. This is social change work (MCADSV, 2012).” 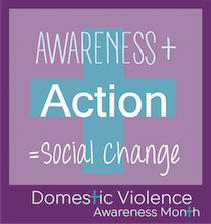 Domestic violence is preventable! This October, the Domestic Violence Awareness Project of the National Resource Center on Domestic Violence seeks to foster healthy families and communities by encouraging all of us to be part of the equation Awareness + Action = Social Change. This concept originated from the Transforming Communities: Technical Assistance, Training, and Resource Center (TC-TAT), providing leadership in prevention since 1997. Awareness + Action = Social Change is a framework that offers an opportunity to engage in critical conversations about what Action looks like.

Moreover, we are committed to engaging in domestic violence prevention through a racial justice framework. As we move upstream, we recognize that domestic violence is linked to a web of oppressive systems such as racism, xenophobia, classism, ableism, sexism, and homophobia, and that violence disproportionately affects women, children, and other marginalized groups. Experiencing multiple forms of oppression increases one’s vulnerability to violence, and can make it more challenging for victims to find the help and support that is responsive to their individual needs. By applying a racial justice lens to our work, we acknowledge the role of racism and privilege in perpetuating violence in our culture, and we commit to working to dismantle these constructs at the individual, community, and societal levels. (Check out this short video by educator Joy DeGruy for an example of how aspiring allies can use their white privilege to stand up to systemic inequity.)

In a seminal writing in the early 1990s, Kimberlé Crenshaw argued that the violence that many women experience is often shaped by other dimensions of their identities, such as race and class. To illustrate her point, Crenshaw shared her observations of the dynamics of “structural intersectionality” present in battered women’s shelters within minority communities in Los Angeles:

“In most cases, the physical assault that leads women to these shelters is merely the most immediate manifestation of the subordination they experience. (…) Shelters serving these women cannot afford to address only the violence inflicted by the batterer; they must also confront the other multilayered and routinized forms of domination that often converge in these women’s lives, hindering their ability to create alternatives to the abusive relationships that brought them to shelters in the first place. Many women of color, for example, are burdened by poverty, child-care responsibilities, and the lack of job skills. These burdens, largely the consequence of gender and class oppression, are then compounded by the racially discriminatory employment and housing practices women of color often face (Crenshaw, 1993).”

“My focus on the intersections of race and gender only highlights the need to account for multiple grounds of identity when considering how the social world is constructed (Crenshaw, 1993).”

More than 20 years later, this conversion about intersectionality, how violence operates in institutionalized ways, and how marginalized groups disproportionally experience violence, is as urgent and critical as ever. As INCITE! – a national activist organization of radical feminists of color – argues, it is impossible to seriously address sexual and intimate partner violence within communities of color without addressing larger structures of violence such as militarism, attacks on immigrants’ rights and Indigenous treaty rights, the proliferation of prisons, economic neo-colonialism, the medical industry, and more.

“Intersectionality is a framework that must be applied to all social justice work, a frame that recognizes the multiple aspects of identity that enrich our lives and experiences and that compound and complicate oppressions and marginalizations (Uwujaren & Utt, 2015).”

That’s why we are committed to raising up these important conversations during Domestic Violence Awareness Month and throughout the year. As a movement, we know that community organizing is prevention work, and that addressing the intersectionality of oppressions and creating partnerships with other social justice movements are core components of effectively preventing domestic violence and contributing to the health and well being of our communities.

Join us for this year’s series of events exploring prevention in action!